From Ranch to Speaker

A gorgeous piece written about my dad, Dean Wink, rancher and Speaker of the House of the South Dakota House of Representatives, by Sherry Bunting for Progressive Cattleman. Bunting conveys my dad’s spirit and the ranching and political life, no small feat. Enjoy.

He may have grown up on a typical 1940s diversified farm in Iowa, but Dean Wink and the South Dakota prairie adopted each other decades ago.

The longtime rancher served eight years, representing Meade and Butte counties, in the South Dakota House of Representatives and termed-out as speaker at the end of 2016.

His time in the legislature was marked by the balance a rancher understands – that of knowing limitations, seeing short-term decisions in the context of long-term outlooks, building relationships, relying on gut instincts, appreciating how a mix of views – like a mix of grasses – strengthens the land and “following your heart on the right way to go at a given time.”

After graduating with degrees in biology and physical education from Yankton College in South Dakota, he made a brief pro football career with the Philadelphia Eagles, followed by earning his masters in physical education and teaching at colleges while his wife, Dr. Joan Wink, followed her educational pursuits.

From there, he went back to a ranching partnership in Cascabel, Arizona, and time working for a Texas cattle company. He ultimately returned to South Dakota in 1988 to establish roots on land first homesteaded by Joan’s grandparents in Howes – about 65 miles east of Rapid City.

Roots for the long run

Such interdependence followed Wink to the legislature where, as speaker pro tem and then speaker, his goal was “to always respect the process, so colleagues could be assured their bills would have a fair hearing.”

“I always recommend to concerned citizens that they get to know as many legislators as possible before asking them for their vote on a particular bill,” Wink relates.

“Both parties need a chance to express their points of view before critical votes are taken. There may be insights that both sides need to know, where amendments can be offered to bring parties together.”

The South Dakota legislature is one of only 15 with term limits, something Wink has always supported. But he admits that it has a downside: “It does give more power to the administration.”

When legislatures turn over, the administrative bureaucracy continues on through these changes and can gain the upper hand in regulation ahead of representative legislation.

Ranchers understand the limitations of the land. At the Wink ranch, cows are moved once every 30 days so that each of the 12 1,000-acre pastures get grazed once per season for 30 days.

As we drive, he points out the projects he is glad to be working on to make the management more “hands-off” so he and Joan can travel more. After Winter Storm Atlas devastatingly downsized the herd in 2013, Wink began renting pasture to young ranchers from June through September instead of building his own herd back up to its pre-storm numbers.

We talk about the variety of native grasses from the short curly buffalo grass that greens up quickly after a rainfall to the western wheat grass, tall green needle and bluestem. Each has its place and time in the life cycle of the prairie.

“A mix of warm- and cool-season grasses is always the goal,” he says, noting that this year’s drought punctuates two years of ample moisture following the previous three years of drought.

Such is the dryland prairie. “We have to know the best use of the land, the limitations – soil type and moisture. I would like to see it stay in grass, and we need cattle on this land to do that,” Wink observes.

“Most of these ranches do not have enough water in the wells to irrigate for crops, but this land works well for livestock.”

A future for producers

We stop at a break in the fenceline. While he helps an escaped calf back through to its anxious mama, Wink talks about the future of the beef industry.

“Concentration in the packing industry is at a worrisome level. The cattle market has the influence of hedge funds driving cash markets via the futures markets,” he observes. “At the same time, the cash markets are razor-thin because packers have controlling interest in the cattle supply, even in cases where they don’t own the land.”

He cites the cow numbers being down to 50-year lows in 2013-2014, with the world looking for beef. “We usually see three- to four-year cycles, but this time we saw just one very good year in 2014 and then it crashed.”

It’s not a complaint so much as a desire to see cycles based truly on supply and demand, where producers have some opportunity to prepare for the bust during the boom.

“Agriculture is unique. We have no control over aspects of weather or markets, but the things we can control are the antitrust issues,” he says.

As the industry moves toward fewer independent feedyards and a growing sector of captive supply, he wonders how long it will be before packers having formulas based on the weaned calf, making it tough for the cow-calf operators to get the bids for their calves.

The challenge going forward? To have a beef industry that works as a team while realizing the combined independence and interdependence of the farmers and ranchers within that team.

“Playing football in the NFL was probably the most memorable time of my life,” the South Dakota rancher reflects. “I came into it as an undrafted free agent and got the call from the Philadelphia Eagles to be activated to play.

I will never forget Bob Brown (Hall of Fame offensive lineman known as “The Intimidator”). I lined up with him at practice every day for two years. I learned from him to hold my own.”

In the same way, he says, farmers and ranchers can hold their own in a changing beef industry and, if given a fair shake, can do so long term.

“Globalization is taking place whether we want it or not, and we have to adapt to it,” Wink affirms. “But if we can’t compete with Brazil on our scale or cost of production, then we should be able to differentiate our product with labels and let consumers decide.”

He and others were devastated three years ago by the ill-timed Storm Atlas in the Black Hills region – home to a large source of cattle, where the grasslands and livestock and rural economies are interdependent.

“Storm Atlas demonstrated how tenuous being in this business of agriculture can be. Most people who are not involved don’t realize that the two main criteria for success and profit (Mother Nature and the market for our products) are things for which we have very little control,” Wink relates.

“The biggest regret I hear and feel is that we couldn’t benefit from the best cattle prices ever in the following year due to our loss of livestock in that storm.” 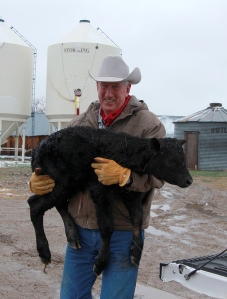 But ranchers and farmers are a resilient bunch. They accept that being involved in agriculture comes down to “the job we do, the lifestyle we live and the joy and satisfaction we get from being involved,” he suggests. “Both the good and the bad come with the territory.”

As Country of Origin Labeling was repealed, Wink observes that it may be more important than ever to communicate with consumers about where their beef comes from, not just in terms of safety and regulations but in seeing that the U.S. beef industry is about more than being the most efficient beef producer or in contracting everything down to its lowest global cost.

There are livelihoods, legacies, limitations and the land to think about, including the interdependence of the cattle to the grasslands and prairie ecosystems, and of the people and rural economies that depend on both.

Sherry Bunting is a freelance writer from Pennsylvania, who has covered livestock markets and production for over 30 years.

Evening sun on clouds over the ranch.

Last we knew, my dad was out of the hospital after being thrown from his horse, Wyatt was on a plane headed for the ranch the morning after his high school graduation, and I was curled up on the couch writing by candlelight about my heroes.

Dad continues to heal. While our time on the ranch last year was filled with horses and rafting, this year’s time was all about Dad’s healing. The latest X-ray revealed that he broke seven ribs, rather than the five we originally thought, and his collarbone is held together by a piece of metal and a comb of screws into the bone. He’ll light up security at the airport like a firework display.

My plane from Chicago landed on an uncharacteristically wet June western South Dakota prairie – lush and green as Ireland. Our group from Chicago was returning home to places across the US and the world. Branding was the next day on the ranch. Thinking about the different worlds we each inhabit and move between, I wrote of the mosaic of each of our lives the morning of the branding. Mom wrote back, “Mosaic? It’s all about mud and manure!”

Dad oversaw this year’s branding on foot and all went well. Most notable among the conversations at our branding and others, was how many hours shorter brandings are this year,  due to the losses of the Atlas Storm. 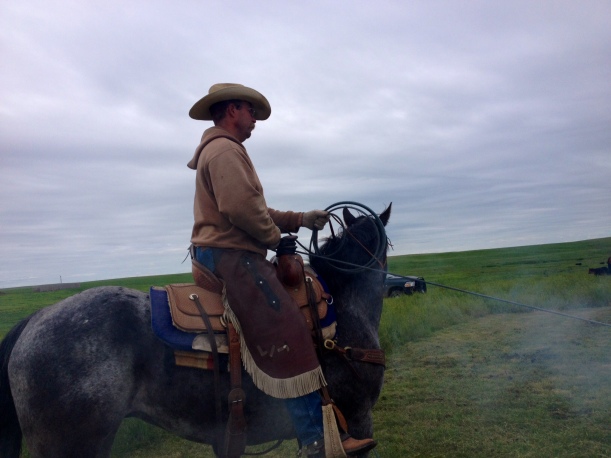 Dad and Billy, laughs amidst the work. 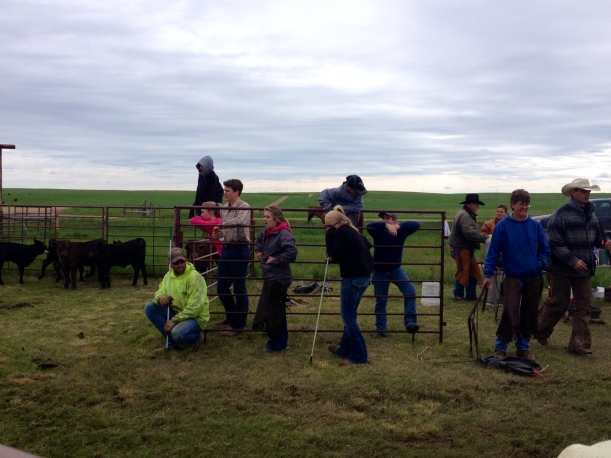 Kids hanging out between calves. 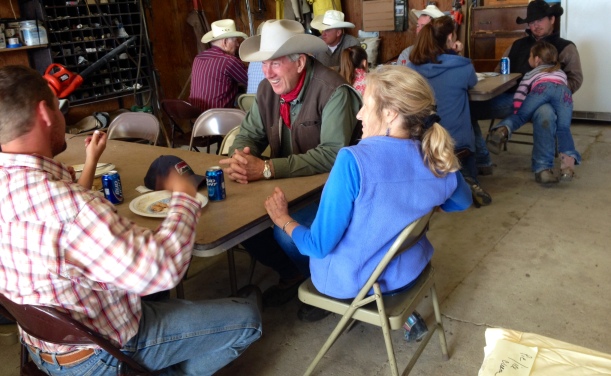 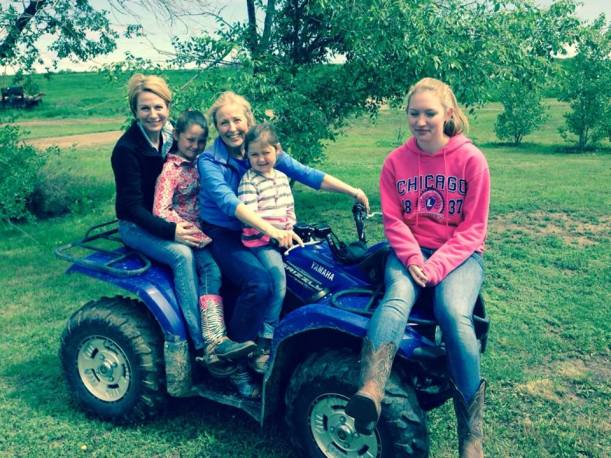 With Mom, final walk on the ranch between storms.

A series of storms blew in trailing thunder and lightning on our final night on the ranch. 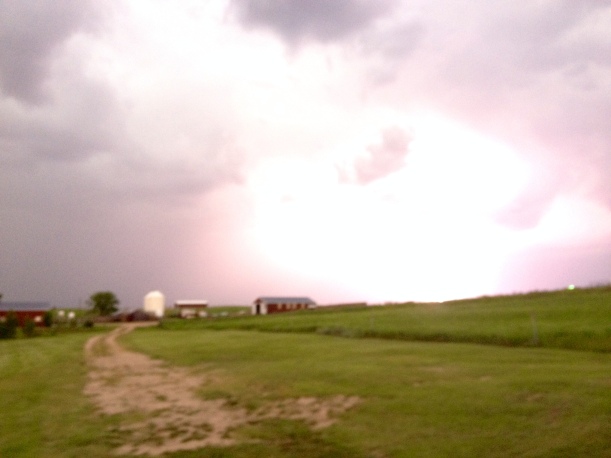 I watched the clouds ebb to the north, as others approached from the south. A rainbow slipped in between storms. I thought of Dad’s healing, of all happening, and the unknown yet to come.

Let us enjoy the rainbow between storms.