Of the many experiences that touched my soul during our time in Oaxaca, México through LISTO Oaxaca, the Women of the Red Clay, las Mujeres del Barro Rojo, is the ember of story that illumines all else. Our bus bounced off the beaten path and over rock-studded dirt roads to the Zapotec community of San Marcos Tlapazola to visit the Women of the Red Clay. 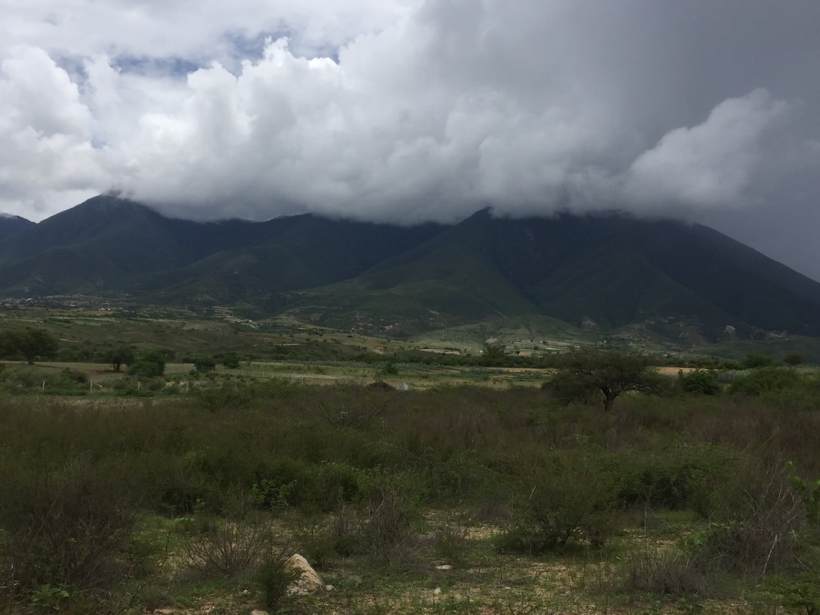 Macrina Mateo Martinez greated us with a smile and Spanish laced with her Zapotec mother tongue.  “I watched my grandparents and my parents when I was a little girl. I had one dress for a year. We slept on dirt. It was so cold.” 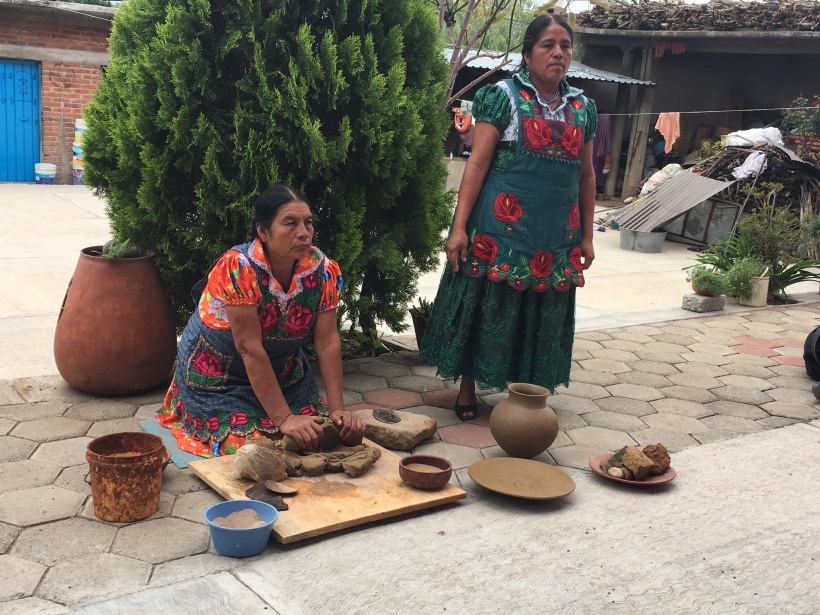 “We had nothing. At sixteen, I decided to try to sell the red clay pottery that the women of our village had made beyond time. I didn’t speak Spanish then, only Zapotec. I went to Guadalajara by myself. The villagers spoke badly of me for leaving and of my family for allowing me to go. Girls did not travel by themselves. The villagers criticized my family.

Sufri mucho, mucho. I suffered and suffered. After many years, my pottery began to sell. Through the years, I have traveled to New York, Portland, Santa Fe. My pottery is in the Museum of Modern Art (MOMA) in New York. Now, all of the women in our village sell our red clay pottery all over the world.”

The strength, artistry, and determination of a lone sixteen-year-old girl who did not speak Spanish in Mexico brought the beauty of red clay pottery to the world.

With Macrina Martinez and Alberta Mateo.

Our class gathered as Macrina and Alberta shared their story of how Zapotec women for generations had walked into the mountains to gather the clay, the stones for dye, and harvested the branches to burn to fire the raw clay into pottery.

Alberta Mateo took an unformed chunk of clay and rolled the corn cob up and down to create the pot within the unshaped form. Up and down rolled the cob under Alberta’s hands, as Macrina spoke to us about the history and experiences of the Women of the Red Clay.

“The men all had to leave to go find work for most of the year. The rest of the time they worked outside in the fields. It was only the women and girls who stayed. I started to learn how to work the red clay when I was a little, little girl. All of the mothers taught their daughters how to work the clay.” 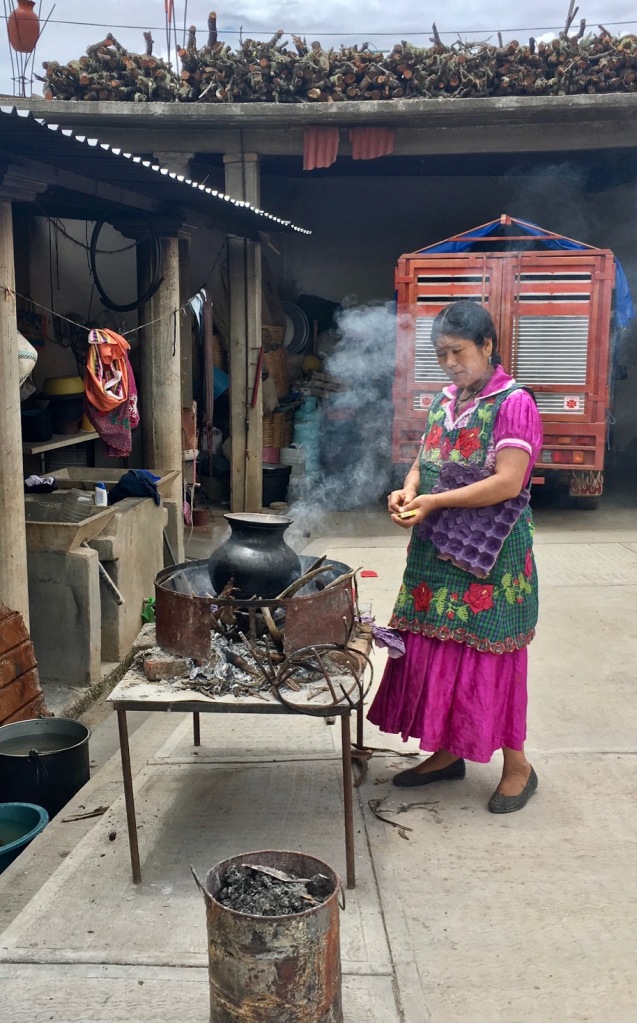 What stayed with me is the difference the vision and strength of one young girl can make. Macrina now hosts groups from around the world. The underlying dynamics of life pierced our conversation when I referred to her as “Señora,” to honor her age and accomplishments. Señora also assumes one is married, the equivalent of Mrs.

“Yo soy Señorita,” she said. “Miss. I never married.” She lifted her eyes to look out the window and then turned back to me. The look she gave me felt like the conveyance of a cost for being the independent and brave girl who left the village against all to become a world-renowned artist and business woman.

Macrina and I spoke for several minutes, surrounded by the beauty of her pottery and art. Sufri mucho, mucho (I suffered and suffered), came through in our conversation again and again, most of her story not said, but felt. The strength of her voice whispers back to me over the miles, the border, the time since I left Oaxaca. I think of this woman who through sheer talent and determination brought the beauty and artistry of generations of Zapotec women to the world.

I gathered the pieces of pottery that I could carry back with me on the plane. Tucked into the woven palm leaf bag, each piece wrapped in clothing, so too came Macrina’s story.

The pieces now adorn our table. Every time I walk by and see them at the center, I think of Macrina’s hands running the corn cob along the lines until the piece emerges. The beauty of each piece carries with it the generations of womens’ hands and life stories, and the strength of Macrina’s spirit, to lift and inspire.

As I pass, I run my fingertip along the rims.