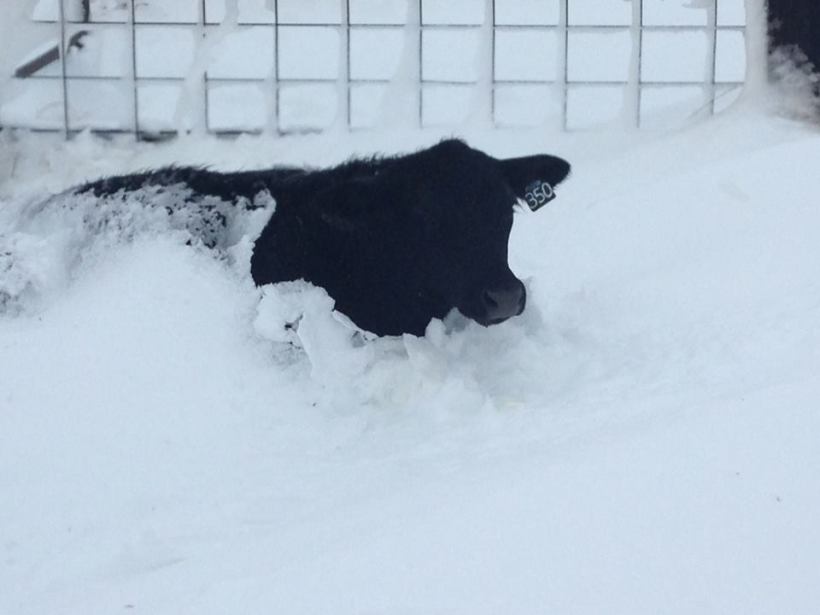 The worst blizzard in recorded history of South Dakota just swept through the state. Tens of thousands of cattle are predicted dead and the much of the state is still without power. The Rapid City Journal reports, “Tens of thousands of cattle lie dead across South Dakota on Monday following a blizzard that could become one of the most costly in the history of the state’s agriculture industry.”

The only reason I know this is because my parent’s ranch, the setting for Meadowlark, lies in the storm’s epicenter. Mom texted me after the storm. “No electricity. Saving power on phone. It’s really, really bad….” She turned on her phone to call me later that day. “There are no words to describe the devastation and loss. Everywhere we look there are dead cattle. I’ve never seen so many dead cattle. Nobody can remember anything like this.” Author of several books and infinite numbers of articles, Mom said, “I can’t imagine writing about this. I’m not going to take photos. These deaths are too gruesome. Nobody wants to see this.”

I searched the national news for more information. Nothing. Not a single report on any of major news sources that I found. Not CNN, not the NY Times, not MSNBC. I thought, Well, it is early and the state remains without power and encased in snow, perhaps tomorrow. So I checked again the next day. Nothing. It has now been four days and no national news coverage.

Meanwhile, ranchers on the plains have been dealt a crippling blow the likes that has not been experienced in living memory. The Rapid City Journal continues, “Silvia Christen, executive director of the South Dakota Stockgrowers Association, said most ranchers she had spoken to were reporting that 20 to 50 percent of their herds had been killed. While South Dakota ranchers are no strangers to blizzards, what made Friday’s storm so damaging was how early it arrived in the season. Christen said cattle hadn’t yet grown their winter coats to insulate them from freezing wind and snow. In addition, Christen said, during the cold months, ranchers tend to move their cattle to pastures that have more trees and gullies to protect them from storms. Because Friday’s storm arrived so early in the year, most ranchers were still grazing their herds on summer pasture, which tend to be more exposed and located farther away from ranch homes.”

In addition to the financial loss, when a rancher loses an animal, it is a loss of years, decades, and often generations within families, of building the genetics of a herd. Each rancher’s herd is as individual and unique as a fingerprint. It is not a simple as going out to buy another cow. Each cow in a herd is the result of years of careful breeding, in the hopes of creating a herd reflective of market desirability, as well as professional tastes of the rancher. Cattle deaths of this magnitude for ranchers is the equivalent of an investment banker’s entire portfolio suddenly gone. In an instant, the decades of investment forever disappear.  It is to start over again, to rebuild, over years and years.

Cattle have a very real money amount that ranchers and their families depend upon. This is also true of acreage and the size of a herd. This why you never, ever ask a rancher, “How big is your ranch?” or “How many cattle do you have?” These are the equivalents of, “So, how about you tell me the amount of money in your bank account?” With these losses, it is up to the rancher to divulge, or not, the number of head lost. It is not polite to ask, again the equivalent of asking, “So, how much money just evaporated from your bank account?” People outside of the ranching world often ask these questions with the best of intentions. They have no idea how these questions are experienced by the rancher.

People have asked me, “What can we say then?” On this occasion, a heartfelt, “I’m sorry for your loss,” goes a long, long way.

Here are two excellent pieces, written by local newspapers, on the loss and devastation to the living landscape:

To ranch is not a job, it is a life. In Meadowlark, which takes place on my parent’s ranch, the main character, Grace, studies the economic situation of the ranch, “By lamplight, Grace pored over the columns of numbers that represented the ranch. The sound of the pencil against the paper rose from the page and drifted into the corners of the room. She studied rows and numbers, written and erased, then written and erased again…This was all this ranch was to the bank: Expenses and income—the quantities of the former far outnumbering those of the later.

Nowhere was there space for the things that represented the ranch’s true value. Headings such as Life, Hope, Dreams, and God-It’s-All-We’ve-Got did not exist. Nor was there room for Memories, Legacy, and Blood-and-Sweat. No item reflected the scent of the prairie grass after a summer rain. No place for the times Grace had rocked James and prayed that the land would sustain him through a lifetime. “

The prairie is a place of extremes, where the weather and land always take primacy, because they must. In Meadowlark, Grace writes in her journal, “The beauty. The bitterness. Not a land of mediocrity but of stunning beauty and brute force.”

The prairie experienced a summer of beauty, with rain we hadn’t seen in years. The prairie was lush with grass and cattle fat and glossy in the pastures. Now, we experience the brute force of the prairie, with tens of thousands of cattle dead and ranching families and communities left reeling. All of this death and destruction from The Blizzard that Never Was.

Mom just wrote, “As the days warm, more and more carcasses are exposed. So many have lost so much.”

I invite you to lift prayers and light to the people and animals of this region. When your dad’s a cowboy, this is what we do. When I told Mom there were so many people sending love, she said, “We feel it. It helps.”

If you’d like to leave your words of encouragement and prayers in the Comments section if this piece, I will make sure they get to those who most need to hear them now.

1,197 thoughts on “The Blizzard that Never Was – and its Aftermath on Cattle and Ranchers”