While I had never read this quote before, at some deep, deep level, this gives language to why I wrote Meadowlark.

“Wait a minute, Dawn,” a friend who is reading the book told me. “I thought Meadowlark was going to be all bluebells and Laura Ingalls Wilder. I have to set it down sometimes.”

No, not all bluebells.

As people write me and tell me of their experiences reading Meadowlark, what I’ve slowly become aware of is how the story takes on a life of its own for each reader, and touches people in ways that I never imagined as I wrote.

What I’ve discovered as a woman and human being walking in this world, is how story taps into the essence of human experience and the power inherent in this release. “Dawn, I read the first two pages and had to set it down and go for a walk,” wrote one reader. “I’ll come back to it, but it will be on my own time.” The sheer humanity of story, in both joy and pain, touches our own humanity and scars. I experienced this as I wrote and I hear now of people experiencing this as they read. The gift that has come from this is a reaching out, a recognition that we are not alone, and conversations about experiences that have long been silent.

“Meadowlark sings a song for all of us, helping us reclaim those parts of ourselves we’ve allowed others to take. We all have that story, in various ways,” my friend, Kenna wrote. “There is a little bit of Grace in all of us.” 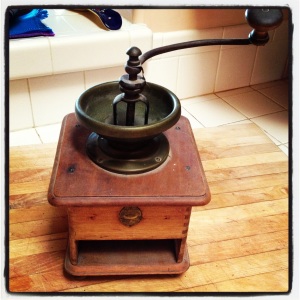 What I’ve discovered as a writer is the very reason that Meadowlark was rejected by publishers—for its lack of following the traditional prairie and Western narrative—appears to be the aspect of the story that resonates most deeply with readers. After several rejections, I tried to write that book, I tried to change Meadowlark into what the publishers wanted. It was a writing disaster – all felt flat, forced, and fake.

After about a year of this, I threw my hands up, told myself that I would listen and write the book as the story revealed itself to me. As soon as I did this, it was as if this vessel of words, story, language above me opened, ran down my arms, out my fingers, and spilled onto the page. During this time, I often turned to Grandma Grace’s coffee grinder, I ran my fingers around the rim and along the smooth wood—and listened. I wrapped my hands around the knob at the top and thought of Grace holding this same piece. What was she thinking? What did she feel? What was happening in her own world and the world outside? I had no idea if I would ever find a publisher, but knew that this was the story that wanted to come into the world.

We create and recreate story as we read. What is true for the reader taps into some, perhaps unconscious, thread of experience and truth in that vessel of thought, experience, and imagination the writer draws from. When that experience involves trauma, “…it is more than simply documenting experience—it’s about illuminating life on earth. It’s about transforming tragedy into art, and hoping that somehow that piece of art may help someone else whose gone through something unbearable and who doesn’t yet see that there truly is a light at the end of the tunnel.”

My own story last week included Seattle.  Seattle, and my time there, was a wonder. In addition to working with an incredible group of laborers around the ideas of cultural diversity, language, and gender, I had the opportunity to reconnect with a dear friend from high school and my cousin, both of whom I hadn’t seen for years.

Seattle – For this prairie and desert woman, There. Is. So. Much. Water! My dear friend, Margaret Schimke Pyfer, collected me from the airport, brought a picnic, loaded us onto the ferry, and we were off! I felt as if we were in a movie. We saw what we were sure were dolphins swimming in front of the ferry. Margaret later said they were porpoises. Porpoises or dolphins, they were magical to see skimming along the surface in front of us.

Grace left many memories. My cousin, Janet Richardson Little, also Grace’s great-grandaughter, and I talked about this when we were together last week in Seattle. It had been at least 16 years since we’d seen each other. She and her family invited me to beautiful dinner and we spent the evening talking books, life, kids, and Grandma Grace.

A time of deep gratitude and roots.

I came home to enjoy the chairs that that Noé transformed in the previous week. I’ve had these chairs for decades and they’ve spent the past several years in our back yard, tired, worn, chipped and peeling white paint. He’s transformed them into these pieces of happiness. Wait until you see what he’s doing with the walls!

Yes, a light at the end of the tunnel…

8 thoughts on “…It’s about Illuminating Life on Earth”